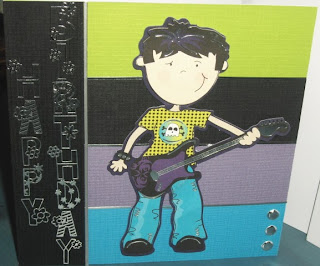 ... this card was commissioned by my brother Philip, for a friend of his who is a member of the group called "The Rock Heavyweights". I've been waiting ages for an excuse to use these cute Kanban card toppers!

I used a basic 8 x 8 white card and attached 4 co-ordinating  DCWV border strips (from the Brights collection) horizontally. I used thin silver adhesive stickers over the joins and placed the topper on top with 3D foam.

I then used some self adhesive letters to spell out Happy Birthday on another DCWV adhesive border strip and attached that to the card vertically. Another self adhesive silver strip was placed along the edge.

The card was finished off by using silver card candy. (Should add that one inch off cuts of the DCWV strips were also placed on the inside of the card with a further Happy Birthday sentiment)

Wish I could get the lighting right when I take pictures as once again the card looks so much better in real life!
Posted by Dots Dashes Doodles & Dreams at 19:28